Plot Summary
​
An ongoing feud between the Capulets and the Montagues breaks out again on the streets of Verona. We get a glimpse into the Spiritual World, where the Dark Spirit of Hate gains control over the two families.

Romeo, only son of the Montagues and his friends learn of a party being held by the Capulets and decide to go to it as masquers. At the party, Romeo meets Juliet, Capulet’s only daughter and they instantly fall in love. Tybalt recognizes Romeo, but is prevented from fighting him by Capulet, as both families have been warned by the Prince of Verona with a death penalty. Tybalt’s rage is kindled by the Dark Spirit.

After leaving the party, Romeo returns to meet Juliet, and they exchange vows of love. Romeo tells Friar Laurence what has happened, and he consents to marry them.

Tybalt, looking for Romeo, finds Benvolio and Mercutio. Romeo returns, and is challenged by Tybalt, but refuses to fight, as he considers him now family. Mercutio draws on Tybalt and is fatally wounded.

Romeo, is entered by the Dark Spirit and kills Tybalt.

Romeo flees and as punishment for murdering Tybalt, the Prince of Verona banishes him from his hometown. Before he leaves, he spends the night with his young wife, Juliet.

Capulet introduces Paris to Juliet, as the man she must marry tomorrow. Juliet refuses, persisting in the face of her father’s anger. She runs to the Friar for help, and he devises a plan: he will give her a drink that will make her appear dead and thus avoid the marriage. He will write to Romeo to tell him; they can then elope to Mantua.

Juliet retires and drinks the liquid. When her ‘body’ is discovered, all mourn, and she is taken to the family crypt.

Immediately, Romeo’s servant hurries to tell his master about Juliet’s death. He beats Friar Laurence’s messenger to the race, and Romeo never hears of Juliet’s plan.

Romeo rushes back to Verona to find his young wife’s cold ‘corpse’. He drinks poison and dies by Juliet, who just wakes up moments later. As she finds her beloved Romeo dead, she kills herself with Romeo’s dagger.

The lifeless young couple is found by their parents. Having lost their most important treasure, all they can do is to gather at the Cross, and repent. Finally, they end their vain feud and make peace. The Dark Spirit subsides.

“For never was a story of more woe
Than this of Juliet and her Romeo.”
(From “Romeo and Juliet” by William Shakespeare) 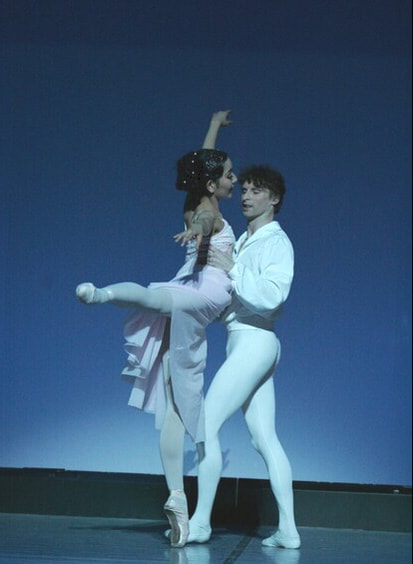 Rio Mitani and Christian Martinu in "Romeo and Juliet"